Search and feel the goodness

Ume: if you know it, you belong to a very small group of experts. Ume is an unusual piece of fruit in Europe. You can only eat it if you ferment it for a very long time. Ume has the looks of an apricot or plum, but as our Japanese ume farmer put it: "It is not apricot. No, not a plum either. It's ume." And so it is!
6 July 2022 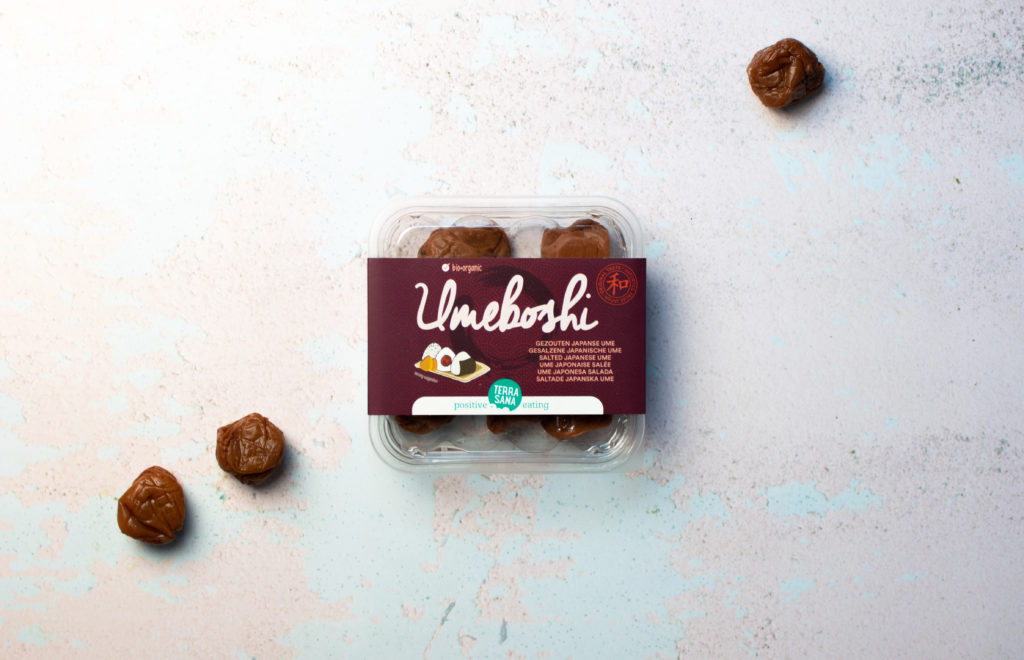 How does Ume taste?

The taste of ume cannot be compared to anything. Because it ferments for a long time, the taste is super strong. You experience two strong flavors (salt and sour) at the same time. If you’ve never tried it, it’s an experience to try it anyway! You either love it or hate it.

What do you use umeboshi or umepasta for?

Umeboshi is the ingredient to flavor rice. In Japan ume is seen as “medicinal” or as the “hangover cure”. An umeboshi at breakfast is therefore very normal in Japan. If you think this is too intense, put it in your dish.

How do we make umeboshi or umepasta?

Fresh ume is not edible, which is why they are salted, dried and pickled in Japan. This is quite a lengthy process with many different steps. At the end of June, the ume fruits are harvested, cleaned and placed in large tubs, alternated with layers of sea salt. The salt draws the juice from the ume and produces brine in the vats. The ume thrives in this for about two months. They keep the juice for ume su (a fresh salty ume dressing or salad seasoning). Then they place the ume fruits one by one on racks, so that they can dry outside in the sun for three to five days. Then the “umeboshi” is born. Literally this means dried ume. Then the umeboshi go into large barrels, where they ripen for a few months to a year. The deep red color only appears when the ripened umeboshi go back into the brine and alternate layer upon layer with red shiso leaves. They remain in this for one to two months, until the color changes from a sun-dried, earthy color to pink-red.

What about umepasta? How do they make that?

Umepasta is a mixture of ground umeboshi, fermented shiso leaf and ume su (juice). Umepasta has the same sour taste and is super tasty with rice (pokebowl) or as a dip with Sushi. Also delicious as a base for sauce, for example in combination with nut butters, tamari and genmai su.

Shiso is umeboshi’s inseparable bff. Shiso leaf is an herb that is related to the mint. The redness of umeboshi comes from a purple shiso strain. The taste is spicy, zesty and slightly bitter. It is very widely used in Japan.

Since the 10th century, the Japanese have used umeboshi as a healthy tonic, preservative, antibacterial agent, and as an energy drink for samurai warriors. An old Japanese saying: “If you drink umeboshi in the morning, you are protected from evil spirits all day long.” In Japanese cuisine and folk medicine, umeboshi has been used for 1,000 years to purify water, cure food poisoning, reduce fever, and protect against fatigue, general malaise, common illnesses and hangovers.